G.I.FOOTBALL COACHING was founded in 2002 by Gary Ives, a UEFA qualified coach. Gary started his coaching career when he was just 19Yrs old after getting his first of many FA coaching badges. For the first 5 Yrs of his coaching career he worked in the USA in over 32 states for Major League Soccer Camps. After his first year of coaching he was promoted to camp director which he did for the next 4 Yrs coaching and organising many different events. After returning home Gary was fortunate enough to get a coaching role with Newcastle United Football in the community and for the next 6 Yrs worked as a head coach for the department. In 1997 Gary became one of the coaching staff at Newcastle United’s youth Academy and has gained vast experience working with many different ages from U9 & U18 professional level. After nearly 20 Yrs Gary is still applying his trade there as Lead Phase Coach, looking after all the Development Centres in the North East and overseeing the u9 / u10 & u11 Academy teams. In 2002 Gary founded G.I.FOOTBALL COACHING to provide coaching sessions to children of mixed ability and backgrounds from the ages of 5 & 14 years old. Over the past 15 years the company has went from strength to strength, helping children gain individual and team building skills and helping many others progress into Newcastle United’s Academy system and development centres. Our main aim is to provide a fun enjoyable environment where children can express themselves and develop their skills without any pressure and in their own time. All our courses are designed around the fun element of learning which over the past 15yrs has proven to be very successful. Children will be encouraged and praised on all courses to help build self confidence and gain a greater desire to want to learn more. All our coaches are UEFA or FA Qualified, fully CRB checked, public liability insured and hold a current First Aid Certificate. 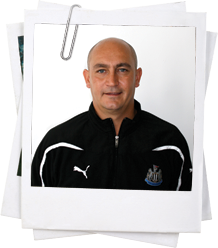